Learn all about Our next 3 games

The soft launch is going very, very well and we’re heavily excited about our next title. It’s been great getting all of your feedback and seeing the game being streamed among our top twitchers within the industry!

Hammer of Vulcan combines hot lava with heavy metal in our most volatile game ever! Travel to the east coast of Sicily, deep inside the ground below Mount Etna, where the God of Fire is making weapons and jewellery for the Gods of Olympus to the tunes of metal music. He might even make you a desirable artefact or two if you’re nice!

Bjarne Grönnevik, Producer: “It became clear early on that the God of Fire and his dangerous forge would be the perfect match for the thrilling math with expanding wilds and these kinds of volatile free spins. I really wanted the player to feel the weight of the game, plus the excitement that any spin could lead to a huge win – you don’t have to wait for the Free Spins to get rewarded. I also wanted the player to be on the edge of their seat with every bet and the team definitely made this happen!” 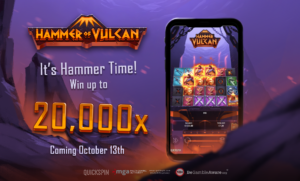 Hammer Strike
When a Hammer Wild land it activates the Hammer Strike feature, all symbols on the same reel, below the Wild will turn into Regular Wilds. Inside the Light the Forge! feature, each Hammer Strike also increases the multiplier by 1.

Titan Thunder: Wrath of Hades offers a high-end drama straight out of Greek mythology, a strong casino theme, and our first static jackpot.

This game boasts gorgeous graphics and tons of exciting features, including 3 fixed jackpots, a Bonus Buy Feature and the chance to win up to 15,000x!

And for the first time ever, multiple RTPs will be available! 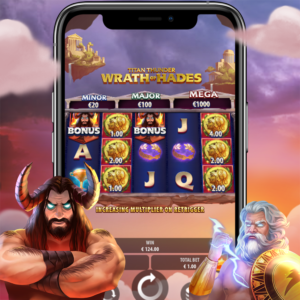 If one or more additional Money symbols land on the reels, they’re held in position and the number of remaining respins is reset to 3.

Money symbol awards are paid in addition to any Jackpot won. The currency of the Jackpots corresponds with the currency of the player’s account. The Lightning Jackpots feature is available in both the base game and the Underworld Free Spins bonus.

Retrigger
During Free Spins, 3 Scatter symbols will add 8 additional free spins to the amount of remaining free spins. The current multiplier for all wins increases by 1x

Forget Santa’s Lapland this winter and come visit the Crystal Prince instead! The star of this ways game is a charming and generous guy who takes good care of his visitors – you can win up to 11,500x!

When the Crystal Prince swings his magic wand around, he can create Golden Wilds and Multipliers. And sometimes he even flies into the Northern Lights and spreads his wealth over the people of his land, so make sure to be around when that happens. 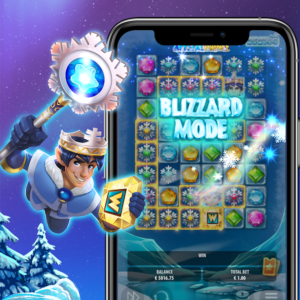